Latmun, the moniker of Joe Bradley is making his mark through his own interpretation of the House and Tech House soundscape.

What came first, DJing or Production?

I was very much a DJ first, I had been playing out in clubs for a few years before I even opened any DAW! Like many people I started producing to further my career and in the process grew to love the production side as much as the djing itself.

Being a DJ first definitely helped me as I knew exactly what I wanted to make from playing so much music out in clubs, this gave me direction from the start so it was then just a case of learning the software enough to be able to translate the ideas from my head.

What was your first DJ setup and how old where you when you started?

My first DJ set up was actually a relatively a modern day one, the first equipment I ever bought was a pair of Pioneer CDJ 1000’s, I had some mixer that I had already bought from eBay, just because I wanted one in my room as I thought it looked cool… haha, I’m not even sure it had a brand! I used that at first and then soon realised it was about as useful as a concrete parachute so bought a Pioneer DJM 800.

Where was your first ever gig as Latmun? How much prep do you do for a DJ set?

My first ever gig under my name was in Nottingham at a place called Market Bar, at this point I wasn’t making music so it was just as a warm up / support DJ, I played there a few times and then started playing at Stealth, where I built up the majority of my DJ experience through a 4 year residency.

Does it vary between club and festival sets?

It really does yeah, especially if you are playing during the day time at a festival. It gives you the opportunity to play tracks that wouldn’t work as well in a dark dingy basement. I often find festival crowds are really open to more unknown music too, maybe because everyone is so happy when they are outside in the sun!

What DJ setup do you use now and why? 3 Essential pieces of production hardware/software you couldn’t do without?

For production I use Logic Pro X rewired with Ableton, so those two are obviously essential! I’m only going to give away one secret VST away here

If you want to check out Latmun find him online here. 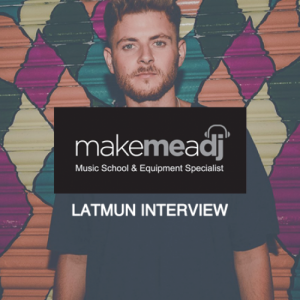